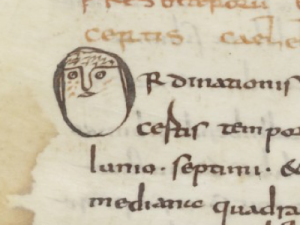 First, some wisdom from old:

This poignant lesson was left in the margin of manuscript BnF lat. 2316 for future generations to ponder over.

Finding codicological notes on the internet when you find out that you need to know more about a particular manuscript but are hundreds of kilometers removed from it, can be a very joyous occasion. At least, that is my experience. In that spirit, I put some of my findings online on Paris, BnF lat. 2316, one of the three extant manuscript witnesses to the Collectio 400 capitulorum.

The ninth-century part of the manuscript (it is bound with a 25 twelfth-century folia) contains a fragment of the canon law collection known as the Dionysiana (fols. 26-84), the aforementioned Collectio 400 capitulorum (fols. 84-120), a fragment of the Breviarium apostolorum (fols. 120-1), some chapters of the Council of Aix-la-Chapelle of 801 (fols. 121-2), and an incomplete copy of Theodulf of Orléans’ first capitulary ad presbyteros parochiae suae of 797 (fols. 122-133).

It is now, in its entirety, available on Gallica, but (again) useful as online digitised manuscripts are, this does not allow for the following codicological observation.

The outside folios of this part of the manuscript are markedly darker and more worn than the remainder. This suggests that these leafs for a long time had formed the beginning and the end of the book, where they would have experienced more wear. This difference in colour is significant, as we will see below. The binding is modern, so it is possible that the combination of the two parts is relatively recent (I have not checked this).

My collation of the first two quires is as follows:

This actually looks familiar from the arrangement in Pal. lat. 577 and a similar thing has happened here, as is clear (again) from the quire signatures. The signatures “Qii i” (?) and “Qii” are found on 32v and 39v respectively.* It would appear that the first bifolium of the second quire earlier constituted the last bifolium of the first quire, but “flipped over” as it were. The strip of parchment (the wanting page 10) corresponds with the first page of this quire and it clearly of darker colour than the leaves around it. This would suggest that the pages this strip is the last remnant of was placed on the outside of the book, where it may have endured so much wear that it became illegible and was cut out. The mutilated bifolium was then attached to the second quire, leaving a first quire of not 8, but 6 pages.

As for the rest of the manuscript:

Hair is facing hair side, and vice versa, with the hair side generally on the outside of a quire.

The scribe, or another person involved in the production of this manuscript, erroneously numbered the 6th quire “Qvii”, resulting in a faulty numbering from then on.

* By the way, has anyone ever encountered such quire marks? They were new to me. Perhaps they hold a clue as to the origin of this manuscript.